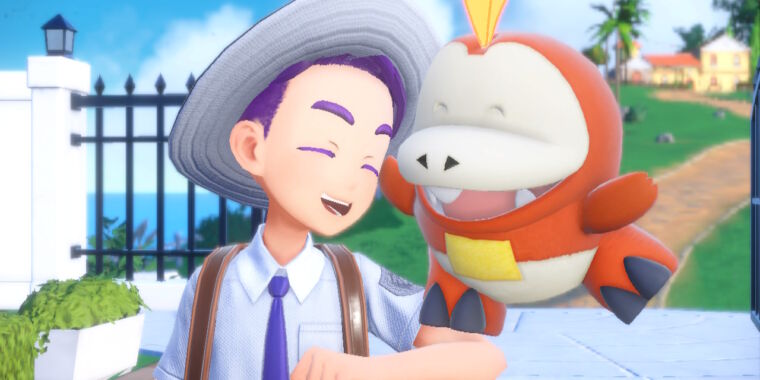 Our review of Pokémon Scarlet and Violet mentioned some of the game's pervasive performance issues, and we weren't the only ones. Even more mainstream outlets like The Guardian and CNN noted the games' performance problems. Eurogamer's Digital Foundry team, known for its in-depth analyses of game performance, called the games "comprehensive technical failures," also calling attention to their blurry and poorly tiled textures and "low-geometry" environments.

Players have noticed plenty of other problems, too; these include a bug that allowed players to run twice as fast by connecting two controllers to the Switch, bizarre animations and clipping problems, Pokémon that blast off into the sky like Team Rocket, and some evidence that online battles were using the same probability seed for every match, making it easier for attentive players to make low-accuracy moves hit 100 percent of the time. I captured a screenshot of a Hoppip that was casting three shadows simultaneously (though it's possible the Paldea region has three suns that I just don't know about).

Nintendo released a 1.1.0 update for both Pokémon games today that includes "select bug fixes" (though the company didn't specify which). But alongside that mostly routine post-launch update came a less-routine acknowledgment of the performance problems and a suggestion that the company would provide fixes.

"We are aware that players may encounter issues that affect the games' performance. Our goal is always to give players a positive experience with our games, and we apologize for the inconvenience," the statement reads. "We take the feedback from players seriously and are working on improvements to the games."

Notably, "tak[ing] feedback from players seriously" and "working on improvements" don't amount to a promise that every single dropped frame and ugly texture is going to be fixed. But like Sword and Shield, Scarlet and Violet will likely enjoy a decent amount of post-release support, including functional updates like Pokémon Home compatibility and substantial DLC additions. This should hopefully justify the time and money needed to make noticeable performance improvements, even though the games as they currently exist have still managed to be the fastest-selling titles Nintendo has ever released.