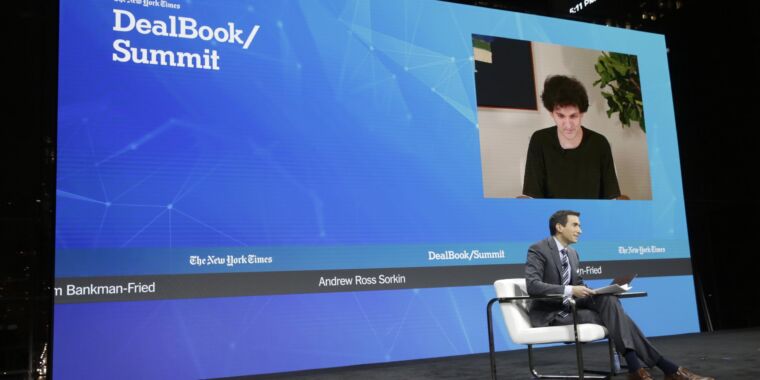 Sam Bankman-Fried speaks on FTX collapse: “I didn’t ever try to commit fraud”

FTX co-founder and former CEO Sam Bankman-Fried was interviewed at a New York Times conference yesterday, speaking publicly despite the advice of lawyers urging him to remain silent about the collapsed cryptocurrency exchange. As the FTX bankruptcy unfolds and lawmakers urge US authorities to file criminal charges, Bankman-Fried said he did not intentionally commit fraud.

"Clearly I made a lot of mistakes," Bankman-Fried said. "There are things I would give anything to be able to do over again. I didn't ever try to commit fraud on anyone. I was excited about the prospects of FTX a month ago. I saw it as a thriving, growing business. I was shocked by what happened this month." Bankman-Fried also said he "didn't knowingly commingle funds" with Alameda Research, a related firm that he co-founded and owned a portion of.

Sorkin asked, "What are your lawyers telling you right now? Are they suggesting this is a good idea for you to be speaking?"

"No. They are very much not," Bankman-Fried answered. "The classic advice, right: Don't say anything. Recede into a hole. And that's not who I am. It's not who I want to be... I have a duty to explain what happened." He said he wants to help FTX customers, "and I don't see what good is accomplished by me just sitting locked in a room pretending the outside world doesn't exist."

No firm answer on returning to US

"I have been in the Bahamas for the last year, and I've been running FTX from the Bahamas," Bankman-Fried replied, saying he's been in contact "with Bahamian regulators and others" and is "looking to be helpful anywhere I can with any of the global entities that would want my help."

When asked if he is able to travel to the United States, Bankman-Fried said, "to my knowledge, I could... I would not be surprised if sometime I am up there talking about what happened to our representatives or wherever else is most appropriate."

Sorkin asked if he is worried about facing criminal charges. "It sounds weird to say it, but I think the real answer is it's not what I'm focusing on," Bankman-Fried said. "There's going to be a time and a place for me to think about myself and my own future. But I don't think this is it... What matters here is the millions of customers. What matters here is all the stakeholders in FTX who got hurt and trying to do everything to help them out."

A Bloomberg report on November 15 said, "American and Bahamian authorities have been discussing the possibility of bringing Sam Bankman-Fried to the US for questioning."

It's not yet clear whether Bankman-Fried will face criminal charges. Senators Elizabeth Warren (D-Mass.) and Sheldon Whitehouse (D-R.I.) last week urged the US Department of Justice to investigate and potentially "prosecute the individuals responsible" for harm to FTX customers. The letter from Warren and Whitehouse pointedly noted that DOJ leaders made a "renewed commitment to investigating and prosecuting white-collar crime earlier this year."

The senators' letter pointed to a Bankman-Fried tweet on November 7 saying that "FTX has enough to cover all client holdings" and that it doesn't invest client assets.

"However, when customers attempted to withdraw deposits, it became clear that Mr. Bankman-Fried and company representatives were lying," the senators wrote. "In an investor meeting, Mr. Bankman-Fried relented, admitting that Alameda Research, an affiliated trading platform of which he is the founder, owed FTX about $10 billion in customer deposits that were lent without their consent—a violation of both US securities laws and FTX's own terms of service."

"I think the world is stunned that he's not in custody," US Rep. Warren Davidson (R-Ohio), a member of the House Committee on Financial Services, said on Fox Business during a segment on Bankman-Fried's interview.

“Were you telling the truth?”

FTX's new CEO, John Ray III, recently told the bankruptcy court that he had never in his career "seen such a complete failure of corporate controls and such a complete absence of trustworthy financial information as occurred here."

Davidson pointed out that Ray previously oversaw the Enron liquidation. "He's like, 'This is on a level I've never seen,' and he did the Enron restructuring. That alone should say, [Bankman-Fried] should actually be brought in and be questioned in the United States, not in the Bahamas right now," Davidson said.

Sorkin asked Bankman-Fried about his now-deleted tweet, four days before the November 11 bankruptcy filing, stating that "FTX has enough to cover all client holdings. We don't invest client assets (even in treasuries). We have been processing all withdrawals, and will continue to be."

"Were you telling the truth?" Sorkin asked.

"Things were changing fast," Bankman-Fried responded. FTX assets were "way larger than liabilities... there was increasing withdrawal demand, but we were meeting all of it." But "by November 8, I did not think the odds were that high that we were going to be able to meet all client demand, and I was worried that there was going to be a substantial liquidity shortfall," he said.

SBF: US division is “solvent”

Bankman-Fried said the US division of FTX is "to my knowledge, totally solvent... I'm confused why FTX US is not processing customer withdrawals right now."

FTX owes its top 50 creditors over $3.1 billion, according to a bankruptcy court filing. At a bankruptcy hearing last week, FTX lawyer James Bromley said that "a substantial amount of assets have either been stolen or are missing" and that the company "was run as a personal fiefdom of Sam Bankman-Fried."

Bromley also told the bankruptcy court that "substantial amounts of money" were spent on items unrelated to the business, including vacation homes in the Bahamas.

Bankman-Fried discussed the Bahamas property purchases in the DealBook interview, saying that about "100 Silicon Valley employees come down here to work for FTX" and "we were trying to incentivize that and to make sure that they had an easy way to find a comfortable life... those 100 people put together here did end up buying a substantial amount of property."

SBF says he has “close to nothing” left

When asked how much money he has left, Bankman-Fried said, "Close to nothing. Everything was in the company." He said he has no "hidden funds," and "I think I have one working credit card left. I think it might be $100,000 or something like that in that bank account. Everything I had, even all the loans I had—those were all things I was reinvesting in the businesses."

Sorkin finished the interview by asking, "Do you agree that over time you also lied?"

"I don't know of times when I lied," Bankman-Fried said. But he admitted trying to "paint FTX in as compelling a way as possible" and in "an exciting and optimistic way."

"I wasn't thinking about, and I wasn't talking about, what are the risks involved with FTX," he said. "I obviously wish that I had spent more time dwelling on the downsides and less time thinking about the upsides."