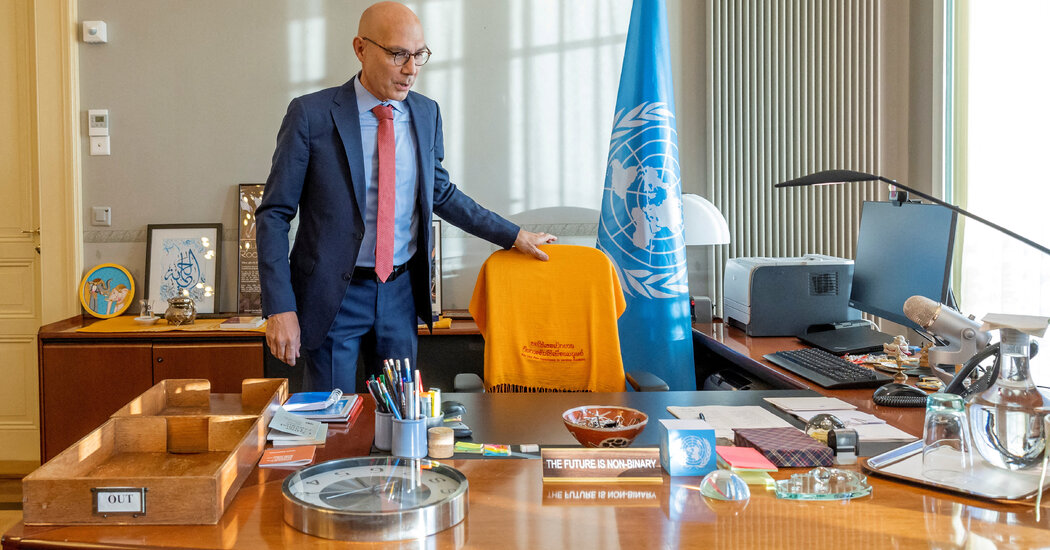 Meet the World’s New Human Rights Crisis Manager. He Has a Lot to Do.

From Somalia to Ukraine to Xinjiang in China, Volker Türk will have no shortage of challenges as he steps into one of the United Nations’ most delicate roles.

A day later, in the capital, Khartoum, he met the generals who were clinging to power with the help of troops using lethal force against protesters. He told the generals that Sudan needed to transition to civilian rule and “make sure that the human rights for all people of Sudan are the driving force behind this political process.”

Past U.N. high commissioners for human rights typically took some months in the Geneva lakeside headquarters of the U.N. human rights office to familiarize themselves with the complexities of the job before leaving for country visits. But Mr. Türk started arranging his Sudan visit before officially starting the job and is working on making one or two trips more before the end of the year. A mission to Ukraine is reportedly on his agenda.

His speed embracing the job points to the practical advantages he brings to the post as a U.N. insider familiar with the organization’s byzantine bureaucracy. Mr. Türk, 57, brings 30 years experience of working for the United Nations, first in its refugee agency — for which he visited Darfur 11 years ago — and then for the past three years working for the secretary general, António Guterres, in New York as a policy adviser, including on human rights.

Mr. Türk’s past as an insider, however, has contributed to the frosty response his appointment drew from international rights organizations. United Nations chiefs have in the past chosen former heads of government, eminent jurists or diplomatic heavyweights for the famously difficult human rights post, since the job requires courting world leaders and, at times, admonishing them for their human rights failings.

Mr. Türk, critics said, was unsuited by experience and temperament for such a delicate role. And his appointment by a U.N. secretary general perceived as weak on human rights stoked fears that Mr. Guterres had picked a quiet diplomat more likely to share his boss’s preference for back-room diplomacy than deploying the powerful weapon of public pressure.

But Mr. Türk’s steady stream of statements and comments in his first month on the job has given some doubters hope. On his second day in office, he condemned Ethiopian airstrikes on civilian targets in Tigray as “completely unacceptable.” After Elon Musk took over Twitter, Mr. Türk issued an open letter reminding the tech billionaire of the platform’s responsibility “to avoid amplifying content that results in harms to people’s rights.”

And as the COP27 climate conference opened in Egypt, Mr. Türk drew the government’s ire for urging it to release Alaa Abd El Fattah, a political prisoner who was recently on a hunger strike, along with other “unfairly convicted” detainees.

A major test of Mr. Türk’s effectiveness will be what he does to follow up on the report his predecessor, Michelle Bachelet, released minutes before stepping down that found China might have committed crimes against humanity in repressing Uyghur and other Muslims in its far western region of Xinjiang.

China dismissed the report as a politicized concoction of Western lies that the United Nations should not have published. Chinese diplomats in Geneva sought to discredit the report as lacking support in the high commissioner’s office.

“It’s my office’s report, and I’m invested in it,” he said in an interview. “There are strong recommendations, and my focus will be on finding ways and means to engage with the Chinese authorities on implementing those recommendations.”

More generally, Mr. Türk told journalists this month, “I will speak out when we feel that our voice can make a difference or when it is needed to amplify especially the voices of victims or to sound the alarm.”

Mr. Türk’s activism comes as no surprise to former colleagues familiar with his career in the U.N. refugee agency. After field assignments in Congo, Kosovo and South East Asia, he rose to be head of protection, a role some describe as human rights in action.

“He’s a roll-up-your-sleeves, get-your-hands-dirty kind of guy, not an office dweller,” said Kirsten Young, a U.N. colleague and close friend who worked alongside Mr. Türk in Kosovo and other areas. “A lot of the work he has been involved in was lifesaving.”

For those who know him well, Ms. Young said, Mr. Türk’s appointment as the U.N. human rights chief was a natural culmination of his life’s work.

“Destiny fulfilled,” she called it.

Mr. Türk sees his new job as the natural progression after a lifelong focus on human rights.

“It started very early,” he said, producing as evidence a faded, dismembered copy of the U.N.’s Universal Declaration of Human Rights that he received as a teenager in school and still carries in his wallet.

“I was marked by the history of my country,” he said, alluding to the Nazis’ annexation of what is now Austria and the country’s links to the Holocaust. “I’m still part of that generation that thought: How could it happen, that’s unbelievable, what can I do to search for a better world?”

A law degree followed in the 1970s, when, he says, he was impressed by the growing feminist and anti-apartheid movements. He then earned a doctorate in international refugee law, paving the way for his hiring by the U.N. refugee agency.

“I was fascinated by the fact that the U.N. can go into a situation and directly do something for people,” he said.

Now, his ambitions as high commissioner include building a much stronger U.N. human rights presence on the ground and raising much more money for an office that is grossly underfunded, given the demands it faces.

The “biggest challenge” Mr. Türk foresees is to rekindle a global consensus recognizing human rights as universal and central to tackling the cutting-edge issues of the day, including the war in Ukraine and climate change. He pushes back at the “misconception” that the Universal Declaration of Human Rights, the cornerstone of international human rights protections adopted since World War II, is a cocktail of Western values.

Human rights, he says, “cannot be the collateral damage of geopolitics and division.”